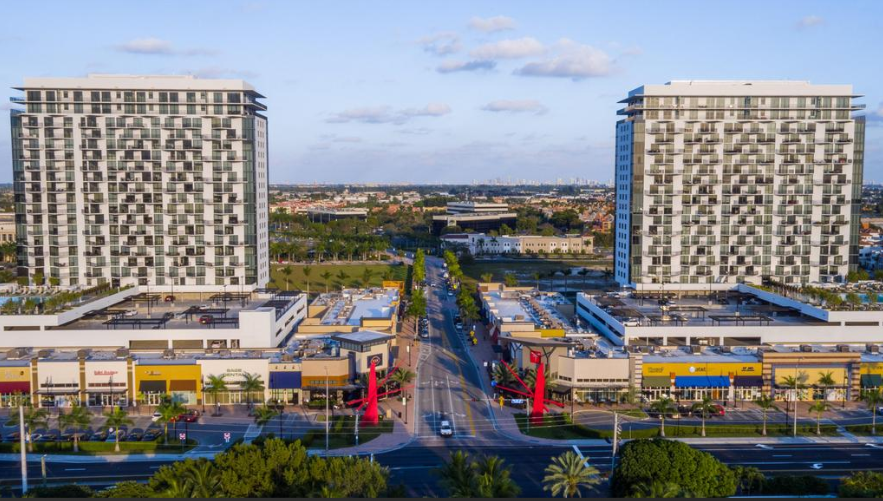 Armando Codina floated its concept of a downtown in Doral in 2014. But the developer’s role in the city began well before that. As far back as 2004, his Codina Group had been one of the largest developers of high-end industrial and office space in the Airport West submarket, part of which would later become Doral.

It built area office buildings, including the former Ryder System headquarters, Florida Blue’s offices, and the Beacon Center and Beacon Lakes corporate parks – the latter of which is now home to Telemundo. Beacon Lakes was the company’s last industrial piece before Codina Group was acquired in 2006 by Florida East Coast Industries in a reported $270 million deal.

Now, Codina’s current company, Codina Partners, is delivering its largest project there yet. With the acquisition of a former Kroger office park and its 31 buildings, as well as the Trump National Doral Miami’s Great White golf course, Codina amassed 250 contiguous acres. Today, that area is the Downtown Doral mixed-use development.

The company and its partners have delivered or are building 70 retail shops and restaurants, 1 million square feet of Class A office space, 5,000 single-family and multifamily housing units, the Downtown Doral Charter Elementary School, Government Center and City Hall, and public green spaces. A senior living facility is also planned.

In a recent interview, Codina Partners CEO Ana-Marie Codina Barlick discusses the company’s first interest in Doral, the changing appeal of the suburbs, and her and her father, Armando Codina’s vision for the city’s – and its own projects’ – future. She called the rare 250-acre parcel her “blank canvas.”

“You’d be hard-pressed to find something that gets to double digits, in terms of the amount of land,” she said. “The opportunity presented in Downtown Doral is singular and unrepeatable in Miami-Dade County, with the scarcity of land, the urban development boundary and the level of density that has exploded over the last couple of decades. So, the opportunity that that presents – I don’t see how it ever gets replicated in Miami.”

What’s been the vision for Downtown Doral? I’d say our overarching strategy with Downtown Doral is looking at the long term and looking at what are the right pieces to make a true community. The elementary school is arguably our best property, right in the middle of the development overlooking the park. But we sacrificed whatever profit could be made from that location because we knew that, in the long run, having the school be the center of the community was going to do a lot more for our customers. That’s really been our overarching philosophy. There’s been a lot of thought into what people really need and want. Parks and schools in Miami-Dade County are a big deal. And we approached how to insulate you from traffic, because you really have everything you need either a short walk or a bike ride away.

What makes Downtown Doral work? We have a pretty robust daytime population, which will continue to grow as we grow. In our second phase, [we will deliver] brick-and-mortar retail and a 15,000-square-foot outdoor space. We will be relocating the Wynwood Yard [concept] to what will be the Doral Yard. That will open in the fall. It’s taking the Wynwood Yard concept and making it more permanent, in terms of the finishes and [being] much better thought out. We’re not going to have the food trucks. We have the shipping container restaurant and some containers in the outdoor area. The stage is a purpose-built stage with built-in seating. It’s definitely meant to be permanent.

You’ll be serving a daytime worker population and the area residents during the nights and weekends? Exactly. I mean we’re looking at breakfast, lunch, dinner, late-night bites and then on weekends a robust live music schedule. It’s really what’s made the Wynwood Yard what it is today. Community programming, classes, education and, of course, music, food and beverage.

How has Doral, as a city, elevated the greater region? Doral used to be considered suburbia, and that’s not what we’re building there. In terms of attracting jobs and corporations, if a company were to relocate within Downtown Doral, you instantly have a campus that larger companies in Silicon Valley spend hundreds of millions of dollars building. You have all of those components just by being a tenant within Downtown Doral. I think that’s definitely something very unique. We’re seeing more and more tenants who appreciate that, particularly when it comes to recruiting, having the housing, the education, the lifestyle surrounding the office buildings. The younger workforce, they’re looking for that balance. They’re not looking to live in Kendall and sit in the car an hour and a half every day to go to and come back from work. Like I said at the beginning, it’s difficult to replicate because I have 250 acres to play with.

What we’re doing is delivering something to an underserved community where you had a lot of pent-up demand for the lifestyle, entertainment, dining, even recreational areas. The people were there who want to enjoy it. You didn’t have to elevate the population, but we are bringing them what they were lacking and craving and would have to get into their car and hop on an expressway to get to.

Some communities benefit from well-planned growth, as others have struggled from a lack of planning. Traffic remains a struggle. How have the area highways played to your advantage? It’s played to our advantage because the biggest political issue in Doral is traffic. Before it was incorporated, planning was terrible. You have industrial traffic right next to residential communities, all of which are gated and have one point of entry. There are no backroads. Everyone is dumped onto the main thoroughfares, and that creates gridlock. You have a number of residential neighborhoods located between Florida’s Turnpike and the Palmetto Expressway, and [everyone’s] driving through residential neighborhoods and commercial neighborhoods. Downtown Doral is not gated. We don’t have closed streets. We’re completely open. That was intentional, from an urban planning perspective, because one of the worst things for traffic is these closed communities. The fact that you have all the uses that you really need to live your everyday life helps the traffic a lot.

It sounds like, because you started with 250 acres, you could really put your stamp on it. That’s a very big selling point. I would say what Downtown Doral offers [is] something that didn’t even exist in Miami when you and I were growing up. That is a fully pedestrian-friendly, bike-friendly, all-inclusive neighborhood where you can actually tell your 12-year-old, if you want to go get an ice cream with your friend on your bike or walk a few blocks away, I’ll see you in half an hour. That didn’t exist when I grew up. We have a nice balance of office workers, retail workers, people coming to shop, parents, students and residents. It really is a truly balanced community. 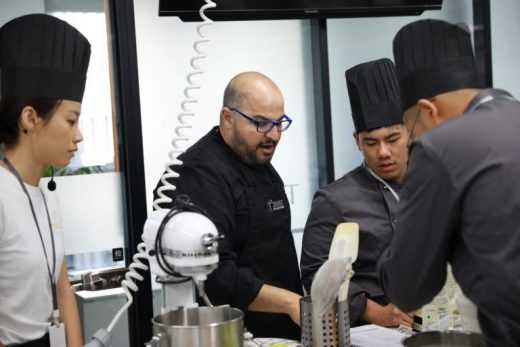 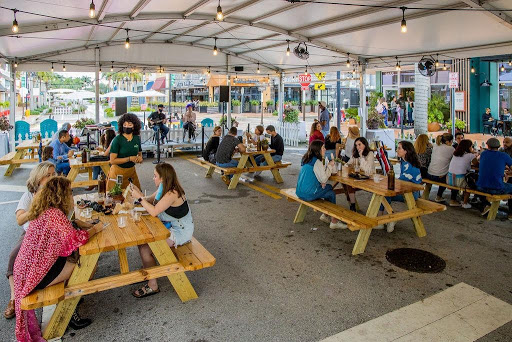