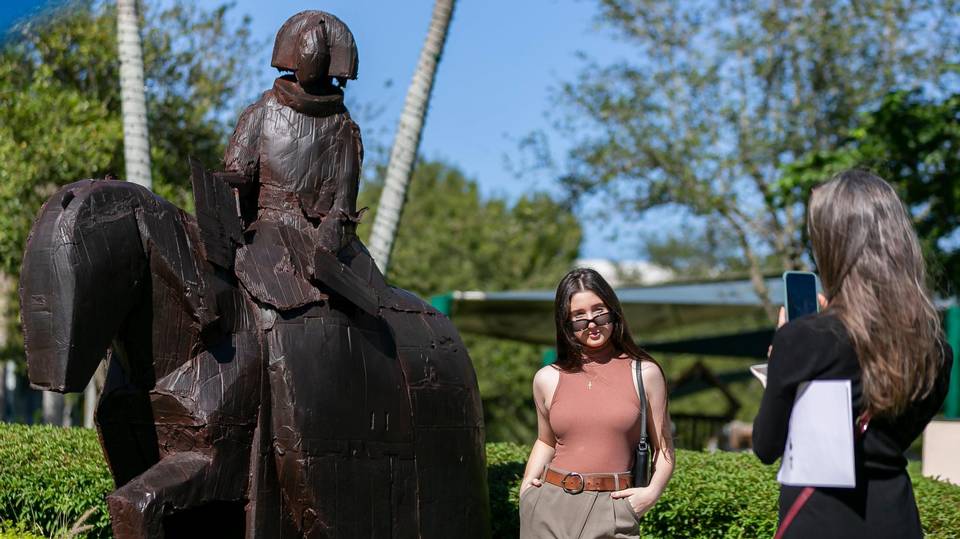 The name Doral often conjures images of warehouses and the tractor-trailers that supply them. Now the city is aiming for a new reputation: art nexus.

Just installed is a monumental exhibition of renowned Spanish artist Manolo Valdés, known for his renditions of Las Meninas, the ladies-in-waiting made famous by a 17th Century Diego Velázquez painting. Valdés is considered one of Spain’s most important postwar artists and has represented the country at the 1999 Venice Biennale.

Until June, 18 of Valdés’ often-colossal metal sculptures will take over the city’s parks. This will be his largest outdoor exhibition to date. Valdés’ sculptures have previously appeared at the New York Botanical Garden, in Miami Beach parks and in the Design District’s Opera Gallery. The total value of the sculptures in the six Doral parks is approximately $16 million.

Titled “Legacy,” the show brings together a variety of his sculptures, from his life-sized bronze Meninas to his towering “Butterflies” – a steel and aluminum bust of a woman wearing a butterfly headdress and measuring the height of almost three basketball players. The piece is valued at $1.2 million.

The city partnered with the Doral Contemporary Art Museum, known as the DORCAM, to put on the show.

“We’re a museum that doesn’t have any walls, so we think outside the box,” said Flor Mayoral, a South Miami based dermatologist who co-founded the DORCAM in 2017. Without a permanent physical space, the museum has been organizing exhibitions and educational opportunities from an executive office inside a Doral warehouse.

Mayoral first came across Valdés’ work on a visit to Madrid more than 10 years ago. Like many others who’ve seen the artist’s sculptures in cities and museums across the world, she said she quickly fell in love.

Around the time DORCAM was founded, Valdés moved his production to ASU Bronze, a Doral foundry just east of the Palmetto Expressway. Most of the pieces that will appear in the show are being transported from the foundry. (He also has a home in South Dade.)

“This is something I’m doing for my neighbors,” Valdés said of the exhibition. Although he lives full-time in New York, he said he’s excited by DORCAM’s enthusiasm and desire to bring more art to Doral, an area he’s gotten to know through his work at the foundry. Valdés decided to forgo his artist fee to put on the show.

Most of the pieces are coming from the Doral foundry, while a handful are being transported from the artist’s home in Coral Gables. Those include his bronze “Alhambra,” a bronze bust with geometric lattice walls that stands more than 11 feet tall. A few smaller pieces came by boat from Spain.

Despite the proximity of the foundry, the installation process is complex. It takes two trucks and a crane to transport larger works, which must first be disassembled, with the busts and headdresses traveling separately. Each site needs to be prepared; with the ground leveled, the pieces can then be puzzled back together using cranes and forklifts.

Even the pieces traveling from abroad require extensive documentation and handling before they can board a ship.

“The logistics are very complicated,” said the artist. “Some of these sculptures have traveled to Beijing and St. Petersburg. When people see them they think it’s relatively easy to get them there, but there is so much that goes on behind the scenes. From making the boxes, to simply moving them – we’re talking about tremendously heavy pieces.”

The effort is well worth it, he says, because outdoor exhibitions have a way of reaching everyone.

“There are many people who don’t go inside a gallery, or museum, or indoor exhibition, but they’ll see an outdoor exhibition and it brings them joy,” he said.

On a trip to Broadway to see one of his exhibitions one year, Valdés encountered a man living on the streets who’d stopped to rest at the foot of one of his sculptures. Curious, Valdés asked him why he’d chosen the spot.

“He told me it was because of the light and how beautiful it looked glinting off the hat on the sculpture,” Valdés recalled.

Bringing beauty to a place is one of the reasons why Valdés said he prominently features women in his work. Early on he became fascinated by Diego Velazquez’s 17th century “Las Meninas” depicting the royal princess preparing for a portrait sitting — a highlight of Madrid’s Prado museum. The piece captivated him, he said, like it has many other artists who’ve reimagined the menina image in their own way — in works of art as well as in music and literature.

“All those different interpretations have helped to sustain my interest,” Valdés said.

“Women have always been heavily present in the history of art,” he added. “But the sculptures you typically see on the street are often boring and feature people from a battle or some other sometimes controversial historical event. The sculptures that artists make for the public are less beholden to telling those stories. I want to beautify a place and allow people to think what they like about the sculpture.”

Beautifying the city by bringing world class art to its residents is one of the reasons why Juan Carlos Bermudez, mayor of Doral, supports the project. Showing off the city, he said, is another.

“A lot of people who’ve never been to Doral or who maybe haven’t visited in a while will be able to see the changes we’ve made,” he said.

The exhibition is just the beginning for Doral’s cultural renaissance.

Miami City Ballet will put on 14 performances of The Nutcracker in Downtown Doral Park from Dec. 18-31. In September, the city council approved an ordinance to rebrand the downtown neighborhood north of city hall as an artisan district. The overlay district adjacent to downtown would transform the area from a heavy commercial and industrial space into one with a mix of light industrial and commercial uses that promote the city’s arts and culture.

Valdés’ exhibition is also not the city’s first brush with a major artist. A sculpture by Miami Beach native Michele Oka Doner was commissioned six years ago by the development group the Codina Partners. Oka Doner’s piece stands across from Doral City Hall.

“A lot of artists have moved here already from Wynwood and other places,” said Bermudez.

He thinks they’ve migrated to Doral drawn by the city’s affordability relative to other areas, its restaurants, and its greenery which he thinks is the best in the county – “Though I’m a little biased,” he said with a laugh.

Valdés’ exhibition will soon be another draw, he adds.

“I’ve been trying to figure out what has impacted Miami the most in terms of art,” said Mayoral. “And when I close my eyes I see the islands and pink that Christo did many years ago. I think one day we’ll talk about before Manolo Valdés and after.” 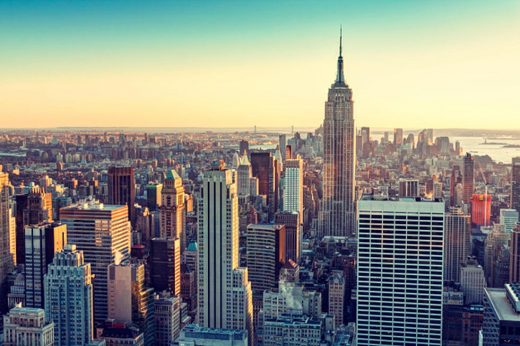 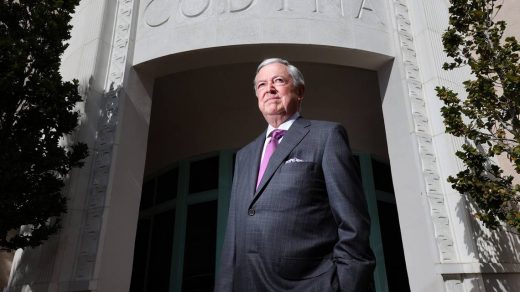